If arrested in Spain, an English-speaking lawyer to represent you is critical, both in custody and in Court, reduce any potential sentence. 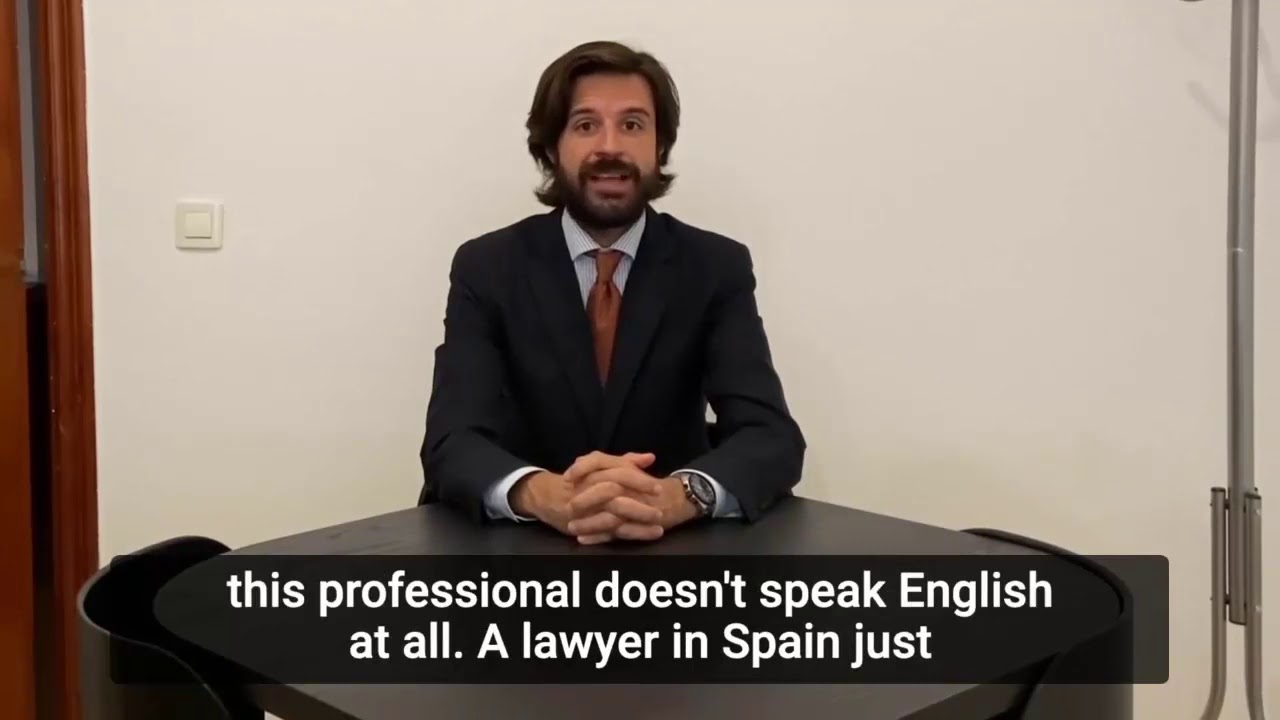 Have you experienced the situation of being informed that your son/brother (or any other close relative) has been arrested in Spain?  This situation could be very distressing for different reasons:

We have had many desperate calls from clients who have contacted us for the reasons above. Many lawyers deal with criminal matters, but not all of them are used to dealing with clients who are under these circumstances.

First of all, when a person is arrested by the police in Spain, they will ask him/her to appoint a private lawyer. In case the arrested person does not know any lawyer, the Government will be able to appoint a legal aid lawyer to assist him/her, so if a friend or family member is arrested in Spain, they will be assisted while in the police station by a lawyer who does not know him/her and you cannot know whether this professional is used to working with non-Spanish clients or if they have a good command of English. It may be that this professional does not speak English at all!

In accordance with Spanish procedural Law, the individual under arrest has the right to be assisted by an interpreter during the declaration in case he/she does not speak Spanish. However, it could be that the interpreter is not present during the moments before the formal statement is taken, which is the most important moment to prepare the defence of the arrested person. Certain facts should not be mentioned, or directly the fact that you must state that you do not want to make a statement– this is a right that the arrested person has when placed under arrest and sometimes this can be the best line of defense.

A lawyer in Spain only needs a Court reference number (Diligencias Urgentes/previas) in order to go to the Court and review the paperwork, which will contain the evidence and charges against the arrested person.

We consider that this situation requires a lawyer who can keep the arrested person updated as well as their family during the entire proceedings, explaining the situation to them and especially, comparing the process with the equivalent process in Common Law, so everyone has a good understanding of which stage they are at.

We are highly specialized in assisting English-speaking clients who have been taken to the police station on Spain as well as representation in Criminal proceedings in Court. We operate across all touristic areas of Spain.

Sometimes, the best option for the client is to negotiate with the prosecutor and reach an agreement with him; in this case the penalty could be reduced considerably, with a high possibility of avoiding a term of imprisonment, being relegated to a release on license, conditional on not getting involved in criminal activity for a period of two years. This can happen with several offences such as Drug Trafficking.

Cases of Drunk and Disorderly

A typical situation that we see in our law firm is where a man is arrested in Spain as a result of a noisy argument in the street, often when he and/or his partner are under the influence of alcohol. Obviously, they were shouting at each other outside. In this case, a neighbour could contact the police, thinking that it is a domestic violence matter and even possibly the police (if this happens in the street) may consider it to be so.

If the police suspect that an individual is mistreating their partner (domestic violence), he will be automatically arrested by the police and, even in if the wife or partner declares that there was no violence, it is probable that the prosecutor (who acts in the name of the Government) continues with the prosecution. At the very least, the man will be arrested and taken to the cells of the police station and, subsequently, he will appear in Court before the Judge. In this case it is important to advise the wife/partner, as well as the arrested person.

During a statement in Criminal proceedings in Spain (either in the police station or in the courts), each word and expression is highly important. That is why it is essential for the lawyer who assists the arrested to speak fluent English and to understand the British idiosyncrasies and culture.

Furthermore, according to our experience, not all lawyers explain all of the details that should be available to the person who has been arrested. For instance, there is a recent precedent from the Spanish Supreme Court considering the declaration before the police not to be so important and confirming that the declaration before the Judge (in the Courts) takes precedence. This means that in case there are contradictions between the police and the Court declaration, the last one will be taking into account. These “details” make the difference between lawyers successfully obtaining the immediate release of their client and those who do not.

The penalty for this crime can be a fine or imprisonment and depends on the severity of the injury, the vulnerability of the victim (if the victim is a minor, disabled or elderly person, etc.) and the means used to cause the injury (if the aggressor used weapons or possesses a special skill such as being a karate black belt, for example).

In addition to the penalty imposed on the person who committed the crime, the victim has the right to be compensated (civil liability) for any damages that may have been caused. The amount of this compensation will depend on the injuries that have occurred and the time required for healing or the consequences that have arisen. Civil liability also includes repairing the damage by paying the corresponding amount if glasses, mobile phones, clothing, etc. have been broken when the victim was injured.

The severity of the penalty (fine or imprisonment) depends on the type of medical assistance that the victim must receive to achieve healing. If the victim only has to go to the doctor once, it is considered a misdemeanour assault or DELITO LEVE DE LESIONES. and if the victim requires medical treatment, we will be facing a felony assault or DELITO DE LESIONES, with more severe penalties.

Therefore, it will be a felony assault if the injury requires medical treatment, that is when the victim has to go to the doctor more than once. For example, the victim is admitted to the hospital or has to undergo surgery or has to receive stitches or an arm or leg is in plaster or he/she is receiving physiotherapy treatment. On the other hand it will be  a misdemeanour, if the victim only goes to the doctor once for a first cure or has no apparent visible injury.

To make the calculation of the fine, the economic capacity of the accused / aggressor will be taken into account, his/her income from work or from others. The fine that can be imposed on an entrepreneur whose company has a profit of 10,000 euros per month is not the same as the one that can be imposed on a worker who only has a pay-cheque of € 1,000 per month. To determine the financial capacity of the accused, only the income, not the family or other charges of the person, are taken into account.

To make the calculation of compensation or civil liability to be paid to the victim, the severity of the injury, the days it has taken to return to full health (receive medical discharge) and the consequences that those injuries have left in the victim will be taken into account. The forensic doctor (doctor from the court) makes a report after studying the medical documentation provided by the victim and the doctor provides a report with the basis for calculating compensation for the injuries based on tables that are set-out in law.

For more information, including for victims of assaults, please see crime of assault.

There are two major aspects to this crime – those who have suffered an attack, and those who have been accused of committing the offence. Of course, this is – rightly – a highly emotive offence in our society and is therefore treated in a unique way. As with all alleged offences, there is a presumption of innocence and a right to a trial. This can often be a traumatic experience for any victim of such a crime.

If you are a Victim of a sexual assault, it is highly recommended to immediately call an ambulance or visit the nearest hospital, if needed and, obviously, to call immediately the police or visit the closest police station in order to file a report.

Once the report is made, you will be called to make a statement to the police and, usually the next day, before a Court. When making such a statement you have the right to be assisted by a translator, if you don’t speak Spanish. You should request one if they are not initially provided.

You have the right to be party in the proceeding against the defendant. In order to do that you have to appoint a lawyer and a procurador (an agent of the court required to be present in legal proceedings).

You can claim compensation against the defendant within the criminal proceedings.

If someone has reported you as the author of a sexual assault, according to the seriousness and the credibility of the report you may be arrested by the police.

Once you are arrested, you will make a statement to the police and, usually the day after, before the Court.

You will be assisted by a lawyer, in case you don’t appoint any lawyer you will be randomly assigned a public lawyer. Please note that is highly probable that the public lawyer will not be able to speak English, as most lawyers in Spain do not speak English.

In any case, this is not necessarily a problem since you always have the right to appoint a private lawyer, at any stage in the proceedings.

Furthermore, you always have the right to be assisted by a translator, if you don’t speak Spanish.

After arrest the Court will probably release you, unless the situation is considered to be particularly serious. So, you may be released with charges (passport withdrawn, required to confirm an address for notifications by the Court) and the proceedings will then usually take place.

For these reasons, it is really important to always maintain communications with your lawyer, even if you have been released, otherwise your chances of receiving a guilty verdict will be much higher, as you won’t be able to be defended properly in the legal proceedings.

If you need assistance with the matters dealt with in this article, please contact us at the phone number provided or using the contact form below
Contact Us

Any cookies that may not be particularly necessary for the website to function and is used specifically to collect user personal data via analytics, ads, other embedded contents are termed as non-necessary cookies. It is mandatory to procure user consent prior to running these cookies on your website.